One Simple Question Can
Add Thousands of Dollars to Your Monthly Income...

"What Are You Doing About Your Debt?"

An Urgent Warning For Financial Professionals

77% of The People You Know Including Your Current Clients,
Former Clients, Warm Leads, Cold Leads, AND Dead Leads...

All Have A Very Profitable Problem That You’ve Never Been Able To Solve... 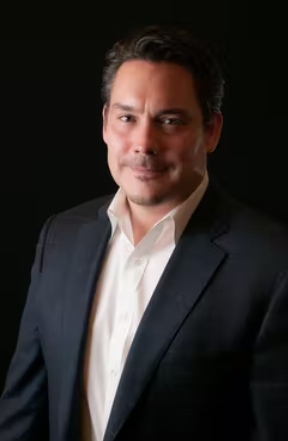 From: Matt Zagula, Founder, SMART Advisor Network
RE: Money you're leaving on the table

I know exactly how hard you work to be successful. Besides being one myself, I currently work with over 250 financial professionals, just like you.

One thing is true for all of us: it’s hard work to get a lead and even harder work to earn a client’s trust and their business.

But, once we break through that barrier – once we become a trusted advisor – it’s easier than ever to earn repeat business and referrals.

Especially if we can solve our clients’ biggest problems.

Which Is Where Debt Free 4 Life™ Comes In!

Debt Free 4 Life™ solves one of the biggest problems faced by 77% of Americans...debt!

In all forms, debt is crippling: at best, it’s a sinister weight on the back of our minds at all time.

At worst, debt is absolutely paralyzing, holding us back from the lives we deserve and leading to stress, heart attacks, and divorce at record levels.

Fortunately, Debt Free 4 Life™ is THE way out of this spiral!

Not only does this proprietary system help our clients pay their debts off years (or even decades) earlier...

It also saves them tens of thousands of dollars in interest...

Build their wealth at the same time...

And do it all tax-free!

Not To Mention,
The Commissions Are VERY Generous!

The average Debt Free 4 Life™ advisor nets a $6,400 commission per client, while our top advisors have earned checks as high as $48,000 by helping a single client!

But here’s the best part:

That’s right...you are helping everyday folks pay off their debt up to 5 times faster, build a comfortable nest egg, and do it all tax free!

Just recently, we had a couple pay off a $300,000 mortgage in 3 years...which is impressive enough on its own.

Add to that they also managed to save over $100,000 in a tax-free account at the same time, and you can really see the power of this system!

It allows clients to simultaneously: 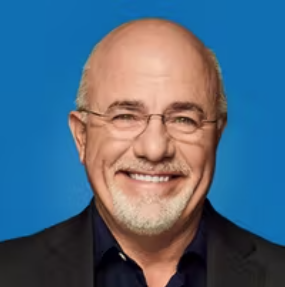 To see exactly how it works, let’s look at Mr. Dave Ramsey:

Dave has become a multi-millionaire by showing Americans how to get out of debt fast.

And clearly this is a profitable strategy, considering he just built a brand-new office complex for $70 million in cash...

And he still has an estimated $200 million in the bank!

So, that alone tells you just how much money there is in helping folks get out of debt. Now, back on a serious note:

Dave is famous for his debt payoff method, the “debt snowball”.

The idea is to make your minimum payment on all your debts, and put any extra funds towards your smallest debt. Once that’s paid off, you “snowball” those payments towards the next smallest debt.

The size of your “extra” payments gets bigger and bigger, until you have a “snowball” of funds attacking your largest debt.

In theory, this is a great idea. It allows you to pay off your debts much faster, and save on interest.

But what happens once your debts are cleared?

You have no money saved, and if you need to make any kind of big purchase, you’re back in debt!

Debt Free 4 Life™ is a modified snowball. The big difference is where those “extra” payments go.

Instead of attacking your smallest debt, your extra funds instead go into a special compound interest account (let’s call this the Debt Free 4 Life™ account). So instead of paying interest, you’re collecting it!

Then, when you have enough funds (with some additional savings built-in), you pay off that smallest debt in full.

Now, the minimum payments you were making towards that debt also go into your Debt Free 4 Life™ account, increasing your wealth faster.

Then, when it’s time to pay off the next debt, you can clear it in full out of the Debt Free 4 Life™ account (without completely draining your account!)

Debt Free 4 Life™ helps you (or your clients) pay off debt nearly as fast as the debt snowball, but at the end, you’re not sitting on zero dollars in your bank account. You’ve got a savings account with tens (or even hundreds) of thousands of dollars in it.

Now, you never need to take a loan for any big purchase ever again. Instead, you simply borrow from yourself.

With no more debt obligations, you are free and wealthy!

Let’s see how this works in practice, with a real-life case study:

Names and images are changed to protect their privacy, but Scott and Erin are real Debt Free 4 Life™ clients.

At the rate Scott and Erin were going, it would have taken them nearly 18 years to clear out that debt. And at the end of it, they’d likely have zero dollars left in the bank.

No more debt, but no savings either.

They were paying over $3,500 a month, and because they had a “good interest rate”, they were confused why they couldn’t make a dent in what they owed.

The reason these giant monthly payments had such low impact was because of their effective interest cost:

Even though Scott and Erin were paying an average interest rate of just over 3%, we explained that their effective interest cost was actually more than 25%.

Meaning for every one of their $3,500 monthly payments, Scott and Erin were paying $907 in interest!

Once Scott and Erin got over the shock of how much money they were throwing down the drain, we showed them the real numbers:

How much faster they could pay off their debt with Debt Free 4 Life™... 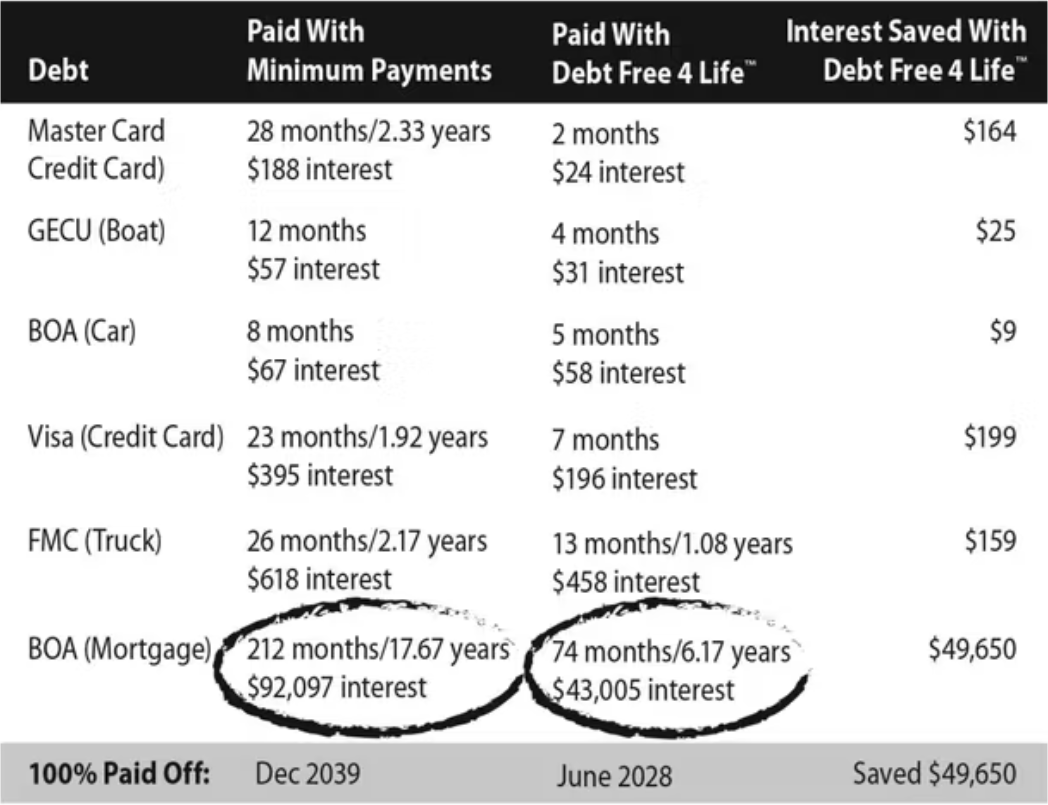 With Debt Free 4 Life™, Scott and Erin will be debt free in just over 6 years...and more importantly, they’ll be debt free over 11 years sooner than if they’d just stayed the course!

They’ll save $49,650 in future interest by paying off their debt so much faster.

And the most important thing...

Which means Scott and Erin will never have to into debt ever again! Any big purchase from now on will be financed by them, NOT by a predatory lender.

Meaning you’d pocket a total of $31,500 while permanently changing these peoples' lives!

This is a win-win for you and your client!

So, Would You Like To Add Thousands Of Dollars To Your Bottom Line Each Month With A 100% Done-For-You System?

When you join Debt Free 4 Life™ you receive your very own personalized, done-for-you marketing page that gets potential clients excited about this one-of-a-kind solution.

Some clients may want more information, or have more questions. Which is why all Debt Free 4 Life™ professionals also receive a 48-page book branded to YOU (with your name on the cover). 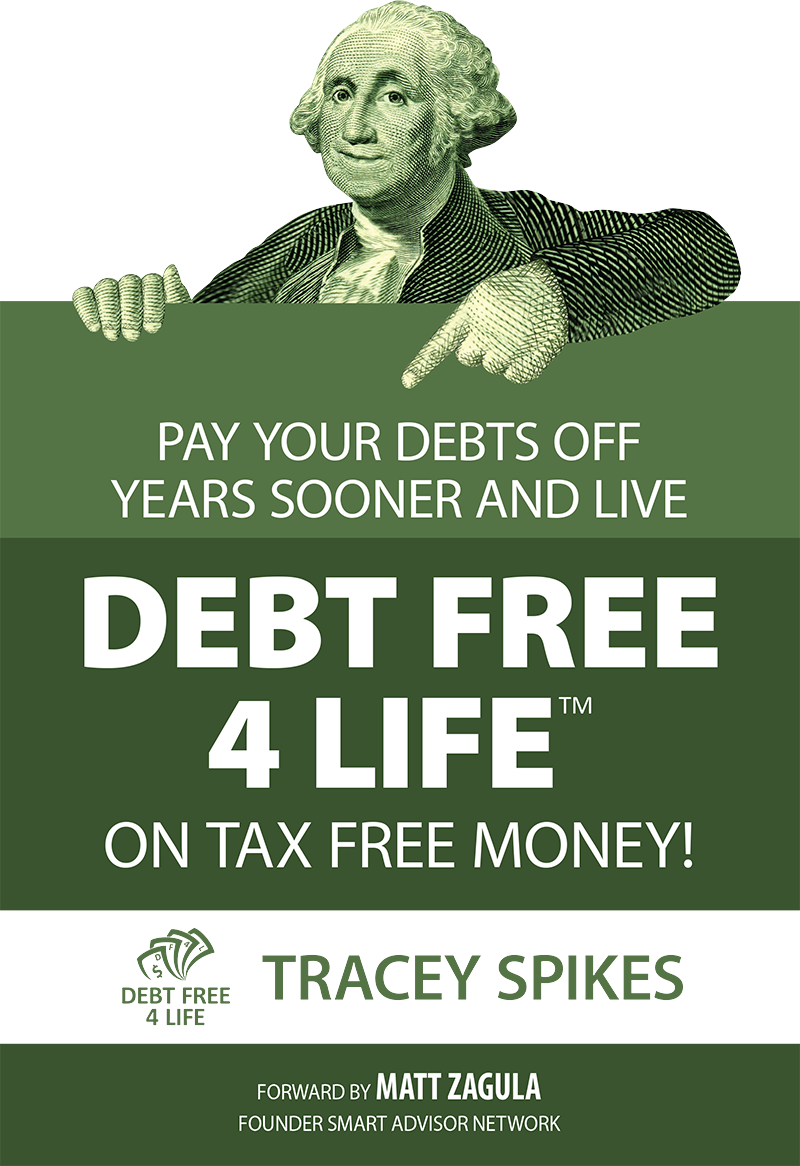 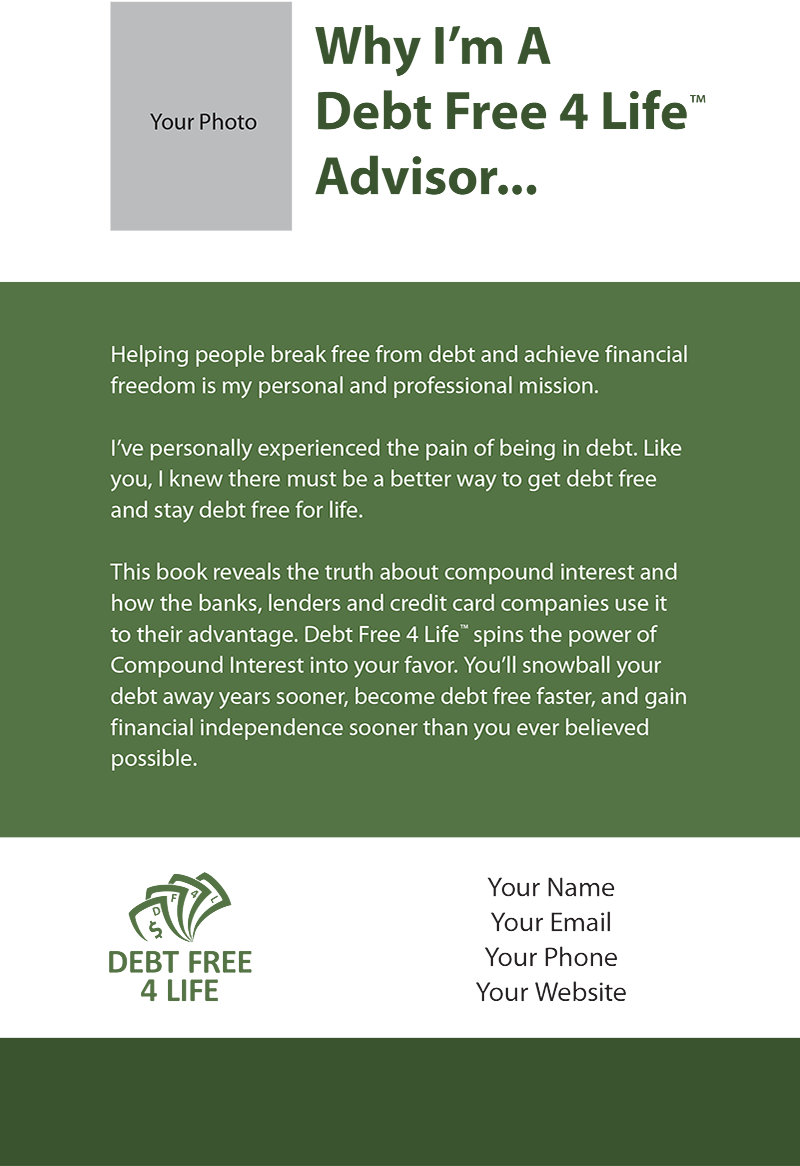 At Debt Free 4 Life™, we want you to be successful. In fact, our #1 priority is to make sure you start earning commissions as soon as possible. And that’s not just lip-service either.

To prove it, we’ve partnered with the top referral training program in the country. The program normally costs $5,000. But when you join Debt Free 4 Life™, we pay your tuition, so you get it absolutely FREE!

But the coaching doesn’t stop there. We don’t want to leave you high and dry after your 6 weeks are up. Which is why after you complete the referral training program, you also get access to our 24/7 online coaching group. All of our top Debt Free 4 Life™ advisors are active in here.

Use this group to:

And that’s everything you need to add thousands (or even tens of thousands) of dollars to your monthly commissions.

The books can be co-branded with our top specialist.

And you can take your half of the commission and be happy.

The investment to become a Debt Free 4 Life™ professional at our “Managing Partner” level is $999 upfront (which covers the cost of printing 100 custom-branded books for you and hard-coding your personalized marketing page) and $197/month thereafter.

This truly just covers our costs, and based on the commission numbers above, one deal could cover your entire investment for the next year…and you’d still have thousands of dollars in profits sitting in your bank account!

Until now, we’ve kept this program small. We’ve limited it to a manageable number of advisors so we could make sure the commissions are high and the results for clients are excellent.

Check out what just a few of our Debt Free 4 Life™ advisors have to say:

But What If You Want To
Take Home TWICE As Much Money?

Along with everything above, you also get:

Remember: nearly 8 out of 10 people you know are IN DEBT. You could practically hand out your personalized Debt Free 4 Life™ books at your local Starbucks and get appointments.

So whether you choose to add this to your existing offerings or go all in on Debt Free 4 Life™, you are solving a big, very profitable problem for the vast majority of Americans.

I can promise you this - if you don’t address debt as the huge issue that it is there is a 100% chance another advisor will get to your contacts, your clients, your marketing list and get this business.

Americans really need your help. The testimonials above tell the story, and we haven’t updated them in quite a while otherwise this page would be way too long. You’ll see fresh success stories daily in our online coaching group.

The additional revenue you earn will be well deserved because it’ll be just a small percentage of the huge amount of interest you save and tax-free dollars you create for the clients you serve.

I’m excited to have you join the Debt Free 4 Life™ family and help us set thousands of American Families free from crippling debt...while also adding thousands (or even tens of thousands) of dollars to your monthly income.